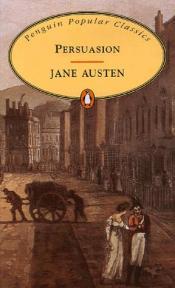 Titel
Persuasion
Sprache
Englisch
Verlag
Penguin Books
Jahr
1994
Seitenanzahl
254
ISBN
0140620540
EAN
9780140620542
Ausgabe
Taschenbuch
Auflage
Unbekannt
Inhalt/Klappentext
Anne Elliot, at the age of nineteen, falls in love with Frederick Wentworth, a young man with no connections and only himself to recommend him. Persuaded by her great friend Lady Russell to break off their engagement Anne has ample opportunity to regret her decision.
Some years later, her father Sir Walter Elliot finds himself financially embarrassed and is forced to let the family home, Kellynch-Hall. The new tenants prove to be Admiral and Mrs. Croft, brother-in-law and sister to Wentworth, who has prospered and is now a captain. Although he and Anne are thrown into each other's company he still feels bitterness at her rejection. He becomes entangled with Louisa Musgrove while Anne receives the attention of William Elliot, her cousin. Once again it seems as though happiness is about to elude them...

Persuasion, Jane Austen's last finished novel, is a brilliant satire and evocation of polite society, full of sharp perceptions on people and personal relations, especially love, and a celebration of the finer values in life.
Bemerkungen
Complete and unabridged