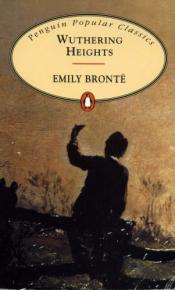 Titel
Wuthering Heights
Sprache
Englisch
Verlag
Penguin Books
Jahr
1994
Seitenanzahl
279
ISBN
0140620125
EAN
9780140620122
Ausgabe
Taschenbuch
Auflage
Unbekannt
Inhalt/Klappentext
One of the most passionate and heartfelt novels ever written, Wuthering Heights tells of the relationship between Catherine Earnshaw and Heathcliff, the orphan boy her father adopted and brought to Wuthering Heights when they were children.

While Catherine forms a deep attachment to Heathcliff, her brother Hindley despises him as a rival. Heathcliff becomes torn between love for Catherine and the rage and humiliation he suffers. Finally he can stand it no longer and, in the violence of a summer storm, leaves the Heights for three years. During his absence Catherine has married, but her tormented heart belongs eternally to Heathcliff who is now prepared to exact his tyrannical revenge.

With its freedom from social convention and its unparalleled emotional intensity, Wuthering Heights ia a highly original and deeply tragic work.