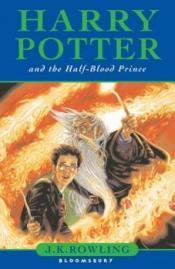 Titel
Harry Potter and the Half-Blood Prince
Sprache
Englisch
Verlag
Bloomsbury Publishing
Jahr
2005
Seitenanzahl
607
ISBN
0747581088
EAN
9780747581086
Ausgabe
Gebundene Ausgabe
Auflage
1
Inhalt/Klappentext
It is the middle of the summer, but there is an unseasonal mist pressing against the windowpanes. Harry Potter is waiting nervously in his bedroom at the Dursley's house in Privet Drive for a visit from Professor Dumbledore himself. One of the last times he saw the Headmaster was in a fierce one-to one duel with Lord Voldemort, and Harry can't quite believe that Professor Dumbledore will actually appear at the Dursley's of all places. Why is the professor coming to visit him now? What ist it that cannot wait until Harry returns to Hogwarts in a few weeks' time? Harry's sixth year at Hogwarts has already got off to an unusual start, as the worlds of Muggle and magic start to intertwine ...

J.K. Rowling charts Harry Potter's latest adventures in his sixth year at Hogwarts with consummate skill and in breathtaking fashion.