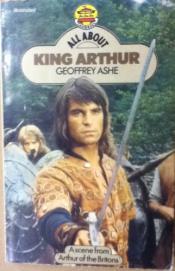 Titel
All About King Arthur
Sprache
Englisch
Verlag
Carousel
Jahr
1973
Seitenanzahl
173
ISBN
0552540390
EAN
Unbekannt
Ausgabe
Taschenbuch
Auflage
Unbekannt
Inhalt/Klappentext
Arthur, King of Britain, became a national hero between the years of 1150 and 1200. The real ruler during most of that time was Henry II. But the legendary monarch was soon more widely renowned than the actual one... and his fame in romance has continued ever since.

How did the Arthurian legend begin, and in what forms have writers and poets presented it over the ages? Even more important are the questions: did King Arthur and his knights ever exst at all? How far are the stories true, how far are they invented? If any of the things happened, when did they happen?

Geoffrey Ashe explores both these paths. He traces the Arthur of fiction from the Middle Ages to the present day; he also tels the historical and archeological facts of all that is known about the King. This includes an account of the results of recent excavations at South Cadbury in Somerset, now believed to be the site of the original Camelot.
Bemerkungen
Preis: Â£ 0,30