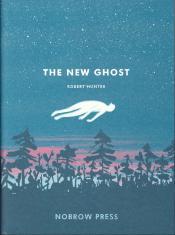 Titel
The New Ghost
Sprache
Englisch
Verlag
Nobrow Press
Jahr
2011
Seitenanzahl
1
ISBN
1907704140
EAN
9781907704147
Ausgabe
Geheftet
Auflage
1
Inhalt/Klappentext
As a flock of ghosts drift through the night, one of their number struggles to keep pace with their speed and ethereal elegance. As a new recruit, the inexperienced spirit has a lot to get to grips with: flight and quantum tunnelling prove to be a little more difficult at first than most humans realise, for a start. Forced to learn on the job, a metaphysical shortcut to keep up with his comrades sees the phosphorescent phantom get stuck in a tree just outside the perimeter of the town†™s towering observatory.

Inside, Astronomer Tom is doing what he†™s been doing every night for years: manning the telescope and charting the night sky. Dedicated to his cosmic vigil, his deepest wish is to discover a new star. His belief is that if he can find one then maybe, just maybe, he could unravel its birth and publish a ground-breaking paper. Taking a look through his super-powered telescope, he suddenly spots a glowing anomaly in the neighbouring field. With a mixture of trepidation and curiosity he approaches the mysterious figure, every step unwittingly drawing him closer to the answers he has been seeking all along†¦
Bemerkungen
17x23 ï¿½ 2001 is a new graphic short story project designed to help talented young graphic novelists tell their stories in a manageable and economic format. The hope is that, while the series encourages artists to write one-off stories, 17x23 can act as a springboard for more ambitious projects.

All rights reserved. No part of this publication may be reproduced or transmitted in any form or by any means, electronic or mechanical, including photocopying, recording or by any information and storage retrieval system, without prior written consent from the publisher, author or artist.

Order from www.nobrow.net
Printed in London by Calverts