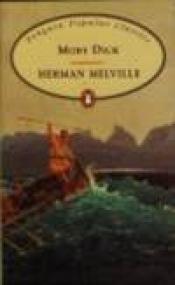 Titel
Moby Dick
Sprache
Englisch
Verlag
Penguin Books
Jahr
1994
Seitenanzahl
536
ISBN
0140620621
EAN
9780140620627
Ausgabe
Taschenbuch
Auflage
Unbekannt
Inhalt/Klappentext
'I look out of my window in the morning when I rise as I would out of a port-hole of a ship in the Atlantic.'

In his imagination melville lived as well as wrote Moby Dick, his great epic of whales and whaling. It tells the story of Ahab, Captain of the Pequod, and of his revenge-mission and insane pursuit of Moby Dick, the fierce white whale. Among Ahab's crew is Ishmael, a young man undergoing a gruelling rite of passage and pursuing a different salvation.
As the Pequod circles the globe like a latter-day Noah's Ark, so Moby Dick ranges and disgresses through space and time, through mythologies, religions and philosophies. It is Melville's great 'romance of adventure' and one of the greatest novels of all time.
Bemerkungen
Complete and unabridged
First published in 1851